Get Involved to Help Better Feed the World

Climate change, urbanisation, soil degradation, pollution, and water shortages are already challenging the ability of Australian and global farmers to produce high quality food, with this demand set to increase by 60 to 100 per cent in 2050 when the population reaches 9.8 billion.

The company is launching a public crowdfunding round tomorrow on the Birchal platform to increase its technology manufacturing outputs to match demand as well as commercialising a ground-breaking methane reduction product for livestock that will also capture carbon reductions and allow farmers to trade credits online. Clinical trials for this product are currently underway with Central Queensland University.

Founded by Australian farmer and regional entrepreneur Mark Peart in 2016, the company’s products have proven to have a significant positive impact on the livelihood of farmers, the health of their stock, and the environment while significantly reducing cost per head of supplementation, labour, and time in numerous trials across Queensland and the Northern Territory with some of Australia’s leading agricultural companies including Paraway Pastoral Company, CAIT, Coolreagh Pastoral Company and AJM Pastoral.

“Agriculture is the last traditional industry,” says Founder and CEO Mark, “but if we don’t disrupt it with tech, especially for our vast and remote pastoral operations and in increasingly harsher weather conditions, we stand to lose our capability as a leading food producer and the idea of farming as a productive or attractive industry sector for anyone.

“Our background as regional farmers gives us a unique perspective and has created an Australian first, a water system based nutrient supplementation technology for farmers that provides both the supplementation products and the delivery systems. We also offer farmers rental options and subscription-based services, so they only pay for what they use. We are here to help them lighten the load as we know first-hand that working the land is tough.”

DIT AgTech manufactures and installs the dosing technology, water dispensing systems, remote monitoring tools and livestock supplements so farmers can monitor and manage the supplementation of grazing cattle through their mobile devices or computer.

One of the company’s earliest adopters, Ben McGlynn Northern Region General Manager of the Paraway Pastoral Company has seen significant results since he started using the products and delivery systems in 2018. “Over the past three years we have built up to 30 units of supplemented water tanks feeding just under 20,000 herd of cattle in one of our largest beef breeding businesses, adjusting products in dry and wet seasons,” explains Ben. “We have kept separate control and supplemented herds to monitor the impact and we are really happy to report our water supplemented group has seen up to 16kg increases in weaning weights, with 25 – 30kg weight difference in the breeding females and 1st calf heifers on average. Generally, PTIC (preg tested in calf) a month earlier than the control group. The water supplemented herd also kept 50 per cent of the breeding females in a 12-month intercalving period during drought times.

“AgTech is the next piece in this industry that will assist to find the one per cent productivity increases in beef cattle production. DIT is a key driver in producing more kilos across Northern Australia and part of that is due to Mark’s 30 years’ experience in the industry and the boots on the ground approach of him and his team. They understand and relate to people in the bush.”

Marcus Curr from Coolreagh Pastoral Company agrees. “DIT easily saves us the time and cost of a full-time worker. Moving from our traditional dry-lick dosage to their water-based system three years ago has saved us serious labour, increased our calving percentages, and improved the look of our herd. They have managed to decrease our work and improve our results, which are getting better all the time”, he adds.

Looking to raise AUS$3 million, the company is crowdfunding to give every day Australians a chance to increase their own wealth while having a positive impact on local and global farming and the environment.

“I could ask big institutional investors or very wealthy people to back me but it’s important to me and my family that every Aussie can have a go at building their own nest egg through investing and supporting this new wave of farming. You don’t have to invest large amount and we’ll work hard to make that work for you,” says Mark.

“We already have contracts, or are running commercial trials, with some of the largest farmers in Australia so we know our product works and the demand is there. This capital is about growing the company to achieve a genuine and long-lasting positive impact for the farming community and the community they serve, and what better way to do that than helping everyday Aussies like us as we go?”

The market potential for DIT is significant. In northern Australia alone, 15 million cattle are supplemented daily to help them survive the harsh conditions with supplementing costing farmers between $20 and $100 per head per year. DIT plans to expand operations across Australia and to overseas markets that use similar vast and remote grazing areas.

Interested investors can express their interest in the crowdfund at https://www.birchal.com/company/ditagtech . Investments can start from as little as $250. 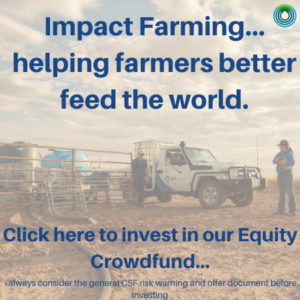